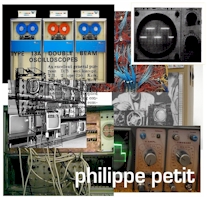 This is the first release on Electronic Musik from Philippe Petit

PHILIPPE PETIT is interested in soundtracks; even if he creates original music he'd rather be introduced as a "musical travel agent" than a composer. PETIT uses a Cymbalum, an Electric Psalterion, computer and synths to build up electronic layers, process acoustic and field recordings. To second the machines he likes to move various glasses, or percussive objects, and take advantage of vinyl material to fondle released sounds. A journalist for various magazines and radio as well as a musical activist, PETIT has celebrated his 25th year of sharing his musical passions as the man behind the cult labels Pandemonium Rdz. and BiP_HOp. PETIT has assembled what people call a dream-team of collaborators, working with: Lydia Lunch, Foetus, Kumo, Scott McCloud (Girls Against Boys), Cosey Fanni Tutti, My Brightest Diamond, Sybarite, Pantaleimon, Graham Lewis (Wire), Barry Adamson, Scanner, Mira Calix, Kammerflimmer Kollektief, Guapo, Leafcutter John, Simon Fisher Turner, Justin Broadrick and many more... Aside his solo works, PETIT is active in Strings Of Consciousness, does a duo with Lydia Lunch, and his collab with James Johnston (Gallon Drunk/Bad Seeds/Faust) just appeared on Dirter Promotions. His first solo album 'Henry: The Iron Man' was released thru Beta Lactam Ring Records, second one 'Silk-screened' is published on Trace Recordings and upcoming is 'A Scent Of Garmambrosia' CD on Aagoo + a picture-disc single with Cosey Fanni Tutti on Dirter Promotions. In the works are collabs with Murcof, Simon Fisher Turner, ASVA, Vultures and "Cordophony" gathering music whose sound comes from the vibrations of one or several strings. Album artwork copyright: Ian Simpson 2011